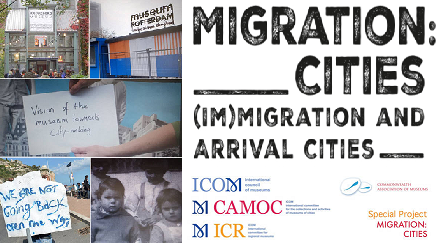 We are working on our archive so that we could share all the achievements of the Migration:Cities | (im)migration and arrival cities.
Stay tuned. More details about the inaugural workshops in Glasgow, Athens, Mexico City and Frankfurt will be posted shortly.
Learn more about the Migration:Cities | (im)migration and arrival cities by visiting its website.

During 2013 CAMOC partnered with Rio de Janeiro’s Museu de Favela (MUF), a grassroots organisation that works in the favelas of Pavão-Pavãozinho and Cantagalo to document community history and develop cultural tourism programmes. Our joint project took as a point of departure:

2. CAMOC’s object of study, that is the cities and the people who live in them; and

3. the innovative nature of favela museums, which, as a type of territorial or community museum, combine inventive strategies of calling forth and presenting community memories with the prospect of better standards of living and the provision of a different perspective of urban museology for CAMOC and its members.

With these concepts in mind, a special urban narrative collecting activity for the members of CAMOC during the 2013 ICOM general conference gradually took shape, and was implemented as a one-day favela documentation workshop on August 15, 2013. During the workshop, 42 people in three teams conducted ethnographic research, interviewed favela residents, and collected photographs and video, in partnership with trained community members who facilitated discussions between residents and workshop participants. These teams hoped to document a wide array of urban changes (social, economic, gentrification, etc.), collective and personal narratives, as well as pre-perceptions of outsiders (i.e. foreign visitors to the favelas) about the standards of living and community relationships within the context of a favela.

CAMOC sees the Insight Favela workshop as a prototype for a series of urban narrative collecting projects in multiple cities that might help our members explore new strategies and tools for documenting their communities. We are working to create an online platform to feature not only the results of Insight Favela but also crowd-sourced content from city museums and other urban cultural organizations around the world. This platform is currently in the early stages; check it out here and then watch it grow.

At ICOM’s 2013 general conference in Rio de Janeiro, CAMOC partnered with ICLM, ICOM’s international committee for literary museums, to highlight the literary flavour of cities around the world. At a special event held at the Rio Botanical Garden, CAMOC and ICLM members read passages from their city’s favourite writers. More than 10 cities were represented, in nearly as many languages; including a Leo Tolstoy passage about Moscow read in Russian by Tolstoy’s great-grandson. It was a particularly moving experience to hear the words of these writers describing the cities they grew up in, the cities they live in,  the cities they know and love. The program from this event is available here.

And so CAMOC asked our members to record these passages so they can be shared with a wider audience. The first batch is already available on CAMOC’s SoundCloud page, and more recordings will be added in the coming weeks. CAMOC board members Layla Betti and Rainey Tisdale are spearheading this project. Contact us if you would like to record a passage from your own city for inclusion.

Museum of the City

In 2009 CAMOC received a €2,000 award from ICOM for the creation of a web site which would effectively be a virtual museum. The project is linked to Portland State University in Oregon, USA under the direction of Professor Chet Orloff, Nohad Toulan School of Urban Studies and Planning at the University, and a member of CAMOC. The project has been advised by Professor Geoffrey Edwards, Department of Geomantic Sciences, Laval University, Québec, Canada and Marlen Mouliou, Lecturer in Museum Studies at National and Kapodistrian University of Athens, Greece.

The project is linked to the University’s Multimedia Design Programme and its Senior Capstone Programme, and the creation of a virtual museum is a specific course within the Capstone programme. This means that the project is connected to a university which can provide it with academic credibility and enable ideas to be tried and tested at a high level. Students of the programme will be developing content for this virtual museum. The project is affiliated with the University, but operates on its own and is its own private corporation, separate from, though working in partnership with, the University. Learn more about the Museum of the City by visiting its website.